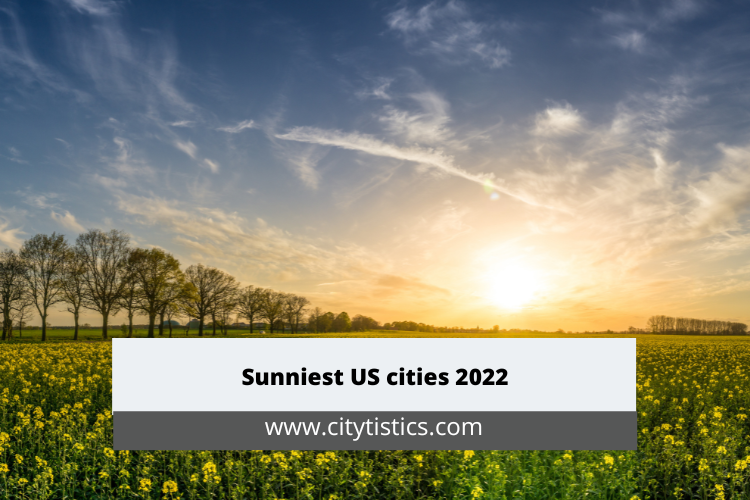 Sun, clear skies and scenery, it’s the dream right? Living in America, there are multiple climates across the country. The most sought after is of course the sunniest places. And why not? It makes total sense to chase the sun! Whether you’re looking for the perfect city to retire, or maybe a sun-seeking nomad, finding the right location is most important. That is why we have decided to curate a list of the top ten sunniest cities in the US for you to move, take a vacation or maybe just for your dreaming pleasure.

To select the cities on this list we have used data made available by the National Oceanic and Atmospheric Association. The cities have been organized by the most sunlight received annually. This has been done by categorizing the percentage of hours of annual sunshine received.

#1 Sunniest Cities in the US

At first place on the list of the sunniest American cities is Yuma in Arizona. You may be surprised that it wasn’t an entry from California. But Yuma receives a tremendous 90% of annual sunshine. Yuma has also been awarded the title of not only the hottest American city but the hottest city on earth! Quite a feat, you could say! So, if you’re considering leaving America to chase the sun you may find that it’s just as easily accessible at home. Not to mention that the chances of having sun is 90% is reason enough to select Yuma as the place to be.

#2 Sunniest Cities in the US

At number two on our list of sunniest American cities we have Redding, in you guessed it California! It didn’t take long for the Golden state to appear on this list! The city, Redding receives 88% of annual sunshine. The climate of Redding is said to be Mediterranean in nature due to its hot summers and cool, wet winters. The city offers plenty of outdoor activities that you can set yourself free in. Definitely, a city you should be considering to visit, at the very least!

#3 Sunniest Cities in the US

Sitting at number three on the list of sunniest American cities is Las Vegas, Nevada. A city that speaks for itself. When it comes to sunshine it boasts 85% of annual sunshine. As you’ll no doubt be aware, the sunshine is just one of the many reasons why you would visit Las Vegas. The statistics show that if you’re visiting the city you’ll be comfortable knowing the likelihood of having sun is very high! What more do you need to set yourself at ease?

#4 Sunniest Cities in the US

The next entry also sits in joint third place for the sunniest American cities. It boasts 85% of annual sunshine. The city is no other than Phoenix! Situated close to the city of Yuma (The hottest city on earth. The question is always asked. which is sunnier, Phoenix or Yuma. You’ll now know that Phoenix, while receiving a lot of sun, actually isn’t the sunniest city in America, it’s Yuma. We have previously written about Phoenix and have praised it for being a great city to consider investing in real estate and also one of the best US cities to raise a family. To add to that list, it is also one of the sunniest American cities, what more can you ask for?

#5 Sunniest Cities in the US

The fifth entry on the list of sunniest cities in America also sits in third place. It is the city of Tucson also from Arizona. It also features 85% of annual sunlight. The city has plenty of attractions from canyons, museums in the desert and trails to explore. So, again plenty of outdoor activities that are on offer meaning you can soak in the sunshine whilst taking in plenty of sights!

#6 Sunniest Cities in the US

The sixth entry on the list of sunniest American cities is El Paso. The first city on the list from Texas. The city receives 84% of annual sunlight, so just missing out by 1% from joint third place. With the city being a border city next to Mexico, it is full of culture and history. Not to mention the amazing scenery that you can take in. Definitely a city to visit!

#7 Sunniest Cities in the US

The seventh sunniest American city on the list is Fresno. The city boasts 79% annual sunshine, a considerable figure! The city also provides amenities such as Regional Parks, Zoos and Museums. Plenty of activities to fill your day whilst making the most of the great weather. The climate of Fresno has been compared to the Mediterranean climate as it features very long, hot and dry summers whilst the winter can be mild and wet. So all in all, if you’d like sun and things to do, add Fresno to your list!

#8 Sunniest Cities in the US

The eighth entry on the sunniest cities of America is Reno. The city receives 79% of annual sunlight which puts it in joint fifth place overall. Whilst the city is most commonly known for the gambling amenities, there are plenty of other activities on offer including thrilling excursions such as rafting and river walks to visiting museums. Not to mention the very high likelihood of sunshine, Reno might just be the place to be!

#9 Sunniest Cities in the US

The ninth entry on the list of sunniest American cities is another city from the state of Arizona. It is the city of Flagstaff. The city receives an average of 78% annual sunlight with the hottest month being July where it boasts highs of 80°F. With the city having the Walnut Canyon, the Arizona Sandbowl and the Sunset Crater there are plenty of options that you can indulge in.

#10 Sunniest Cities in the US

The final city on our list of sunniest American cities is Sacramento. It sits in joint sixth place alongside Flagstaff as the city also receives 78% of annual sunlight. With plenty of Parks, museums and historical landmarks, there are plenty of activities that you can enjoy in the city whilst knowing you are in one of the sunniest cities in America.

There you have it. That’s the list of the sunniest cities that America has to offer. We hope you enjoyed this article and can use it to plan and prepare a trip to explore one of these cities. Make sure to check out the rest of our site for more facts, tips and inspiration.