Skip to content
The Best US Cities for Mental Health 2022 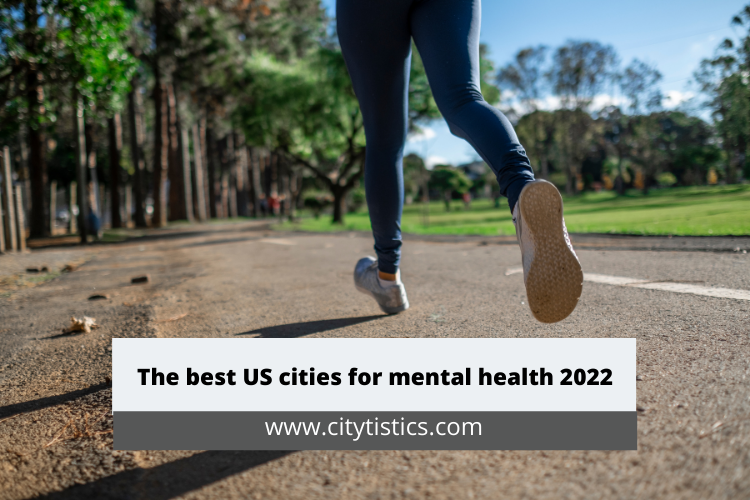 Mental health is an important issue in today’s society, it is a topic that has received a lot more attention over recent years. In fact, NAMI (National Alliance on Mental Health) has documented in a study conducted in 2020 that 1 in  1 in 5 U.S. adults experience mental illness each year  and 1 in 6 U.S. youths aged 6-17 experience a mental health disorder every year. These are certainly sobering statistics. Psychologists have historically documented the importance of issues such as environmental factors  and nature vs. nurture in the prevalence of mental health.

We have produced this article to provide an insight on the best US cities for mental health. So if you are in the process of considering moving to a different city or maybe just wondering where your current city stands in terms of mental health, Read on! The data that we have used to produce this article, includes our very own resources as well as a study conducted by Certapet.

At number one on the list for the US city that is the best for mental health is Denver. The city on our scoring system ranked highly for low cost of living. With financial concerns being a big issue for many people and undoubtedly a source of great anxiety, living in Denver would hopefully help in that regard. Additionally, Certapet indicated low therapy and prescription costs which is also great for getting treatment for mental health issues Denver, also known as the “Mile High City” features the scenic views of the Rocky Mountains which provides for a natural retreat whenever it may be required.. However, it must be noted that from our internal ranking system Denver received an F grade for crime, this may be of concern to some people and must also be factored in.

The next feature on the list of best cities for mental health is Salt Lake City. The city as per our own ranking scored an A grade for cost which makes it an ideal, low cost city to reside in. The city Denver is located close to the Rocky Mountains, perhaps there must be something about the location of these mountains that has a positive effect on mental health! Similar to Denver, Salt Lake City also scored poorly for crime which again must be factored in as to some people, security and safety is an integral part of mental health.

Minneapolis came in at third for the best US city for mental health. The city is known for its parks and lakes which provide for plenty of natural, scenic excursions which of course benefits mental health. The city has also been recognized as being one of the most affordable cities in the USA and as per our rankings it scored highly with a score of A- which of course helps to ease financial concerns that people may have. The city is also quite populous and continues to see a regular growth which can be beneficial to people in finding and maintaining social contact with others. This is known to have a positive impact on mental health.

The next location that made it on to the list of best cities for mental health is Seattle. The city is surrounded by a range of natural resources such as water, mountains and forests, it also features 485 different parks that are available in the city. It is no surprise then that Seattle is a great place for mental health. There are also quite unique diverse social scenes that exist in the city, again providing a means for social connections to be built and maintained. According to our own data, Seattle didn’t score as well as other cities on factors such as crime, education and cost. However, the access to multiple scenic locations definitely makes it a viable candidate for one of the best cities in America for mental health.

The city of Hartford also made it onto the list of best cities for mental health. It must be pointed out that the city has been found to have had a lower median household income which resulted in the city having a higher poverty rate. However, our own data identified education and cost to be factors which the city excelled in. With a lower population size compared to other well-known cities, it may still provide a place to build better and more meaningful relationships away from the busy major cities of America. Therefore, it does make the city a worthy candidate as one of the best cities for mental health in America.

The next addition to the list of best cities for mental health is Baltimore. The city also attained a spot on the list of best cities for lowest prescription costs. It is no surprise that our own data picked up on the lower cost of living in Baltimore and scored it a deserving B+ grade. Additionally, due to the Chesapeake Bay most places in Baltimore are 2 hours away from a beach which again provides for an escape from everyday stressors and makes for a welcomed retreat.

Coming in at seventh place we have Providence city. The city based on our data scored an A+ for cost of living and a B for education, both of which combined gave the city an overall score of B for Livability. These factors combined definitely provide great reasoning as to why Providence is a city worthy of being a great city for mental health.

At ninth place on the list for best cities for mental health, we have the city of St. Louis. The city features multiple vibrant museums, gardens and parks all of which provide depth and character to the city. Additionally, our own ranking system provided scores of A+ for cost, B- for education and an A+ for crime with a respective A- for livability. These factors definitely highlight the worthiness of St. Louis as a city for best mental health.

We hope that you found this article insightful and interesting. Feel free to browse the rest of our site for more articles and information. We also did a feature on the most miserable cities in America.